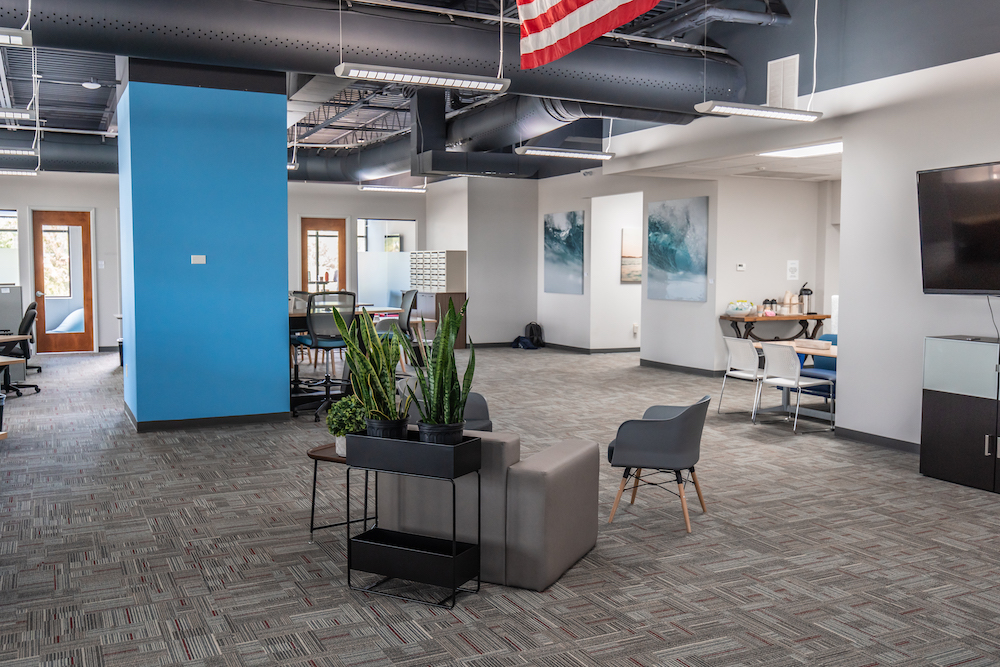 Wilmington, NC is many things. It’s a college town. It has a busy airport. And it boasts a growing population of people who relocated for the ideal mix of coastal living and urban amenities.

“It’s not North and it’s not South,” joked Julie Donlon. “It’s the perfect location in the United States.”

It’s also home to Blue Mind Coworking, where Donlon and her husband Michael launched a space designed so all kinds of professionals can work, create and collaborate, as their tagline promises. They also relocated to the area, seeking the same kind of ocean-powered living as their previous homes in Baltimore and Seattle offered.

The name was borne from a best-selling book, Blue Mind: The surprising science that shows how being near, in, on, or under water can make you happier, healthier, more connected, and better at what you do, by marine biologist Wallace J. Nichols. It focuses on the proven scientific evidence that being close to bodies of water promotes mental health and happiness.

What better concept for a coworking space?

With its walls in various hues of blue and panoramic paintings of serene ocean swells, Blue Mind Coworking puts members in the right frame of mind instantly. Its community includes an array of business owners and service providers who call Wilmington home and discovered they didn’t have to lose valuable time by commuting long distances.

“It’s the whole idea of the ‘15 Minute Village,’” Donlon explained. “The goal is to live about 15 minutes away from anything you need. Our locals get that. We've got people who ride their bikes here and people who walk. They spend the morning with their families, help their kids get to school, and then they're here doing their jobs.”

“Wilmington is close to several of North Carolina’s best beaches. When families stay for a longer period of time, parents come here to find quiet workspaces. They can extend their holidays because they aren’t missing work. We also have a relationship with several other coworking spaces around the state and have multi-city passes for our members to leverage those locations.”

“We looked at other solutions, and Coworks was by far the easiest and most intuitive,” Donlon said. “I met with Tanner Hallman and DeShawn Brown, and just liked them right off the bat. They were so genuine and helpful and it meant something to us to know the people behind the brand really believed in helping businesses like ours.”

Donlon continues to collaborate with the Coworks team, providing feedback on new features and requesting functions that help her--and other operators--streamline their operations.

“I love using the Announcements feature,” Donlon said. “The billing tool is user friendly and it’s easy to set up teams.”

Donlon is excited to see her community grow and find new ways to help them work, create, and collaborate. With events on the calendar including how to set up an LLC and managing business taxes, there’s no doubt smooth seas will prevail.